AmCham, together with the Ministry of Climate and Environment, hosted California Governor Edmund Brown Jr. at an exclusive Patron member reception on Thursday evening, cementing commitment to the Under2 Coalition endorsed earlier this year by Norway and California. 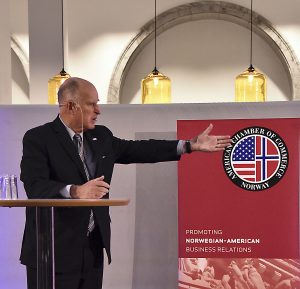 The Under2 Coalition is a global pact of cities, states and countries committed to limiting the increase in global average temperature to below 2 degrees Celsius, the level of potentially catastrophic consequences. Signatory coalition members now represent 40% of the world economy and more than one billion people.

Governor Brown, in Europe to advance Under2 Coalition initiatives, emphasized the importance of close collaboration between countries and states to mutually advance climate sustainability. 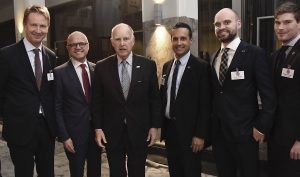 “The entire is world is affected by climate change and global warming, which is why this coalition is so profoundly important. In California, we are a leading state in innovation, but also climate action.”

“Among other initiatives, we are expanding our renewable portfolio, increasing efficiency in buildings and linking up with states and regions to encourage closer cooperation to combat climate change. The science is complex, yet profoundly important as it decides our next steps,” he stated.

AmCham Chairman, Pål Rokke, who started his remarks congratulating both Minister Helgesen and Governor Brown on their leadership within sustainability, subsequently quoted the US government’s scientific report released last week, which clearly states that “it is extremely likely that human influence has been the dominant cause of the observed warming since the mid-20th century.”

“All of us here understand the challenges that lie ahead – yet are equally ambitious in fostering green competitiveness within our respective companies and organizations,” he said, before highlighting sustainability efforts by AmCham member companies 3M, Statoil, DNV GL, Citibank, Yara, Jotun, Norsk Hydro, KPMG, and Coca-Cola.

Both Rokke and Minister Vidar Helgesen naturally mentioned California-based Tesla as a company at the forefront of sustainability.

The Minister also noted that, due to Norway’s electric car policies, there are more Tesla’s on the roads here than anywhere else in the world.

“Climate leadership,” the Minister stated, “was currently coming from tech environments, California, and N. Europe, and unfortunately not from Washington D.C.