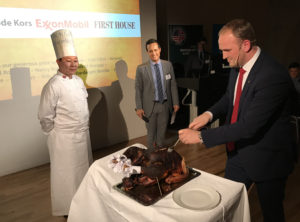 Keynote remarks from Haakon Jacob Rothing, Head of Programs at Red Cross and Jon Georg Dale, Minister of Agriculture and Food, were followed by an authentic Thanksgiving meal – accompanied by California wines Charles & Charles and Barefoot – and the traditional raffle and auction that rounded off the evening. 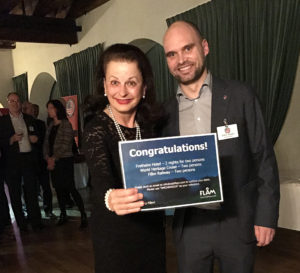 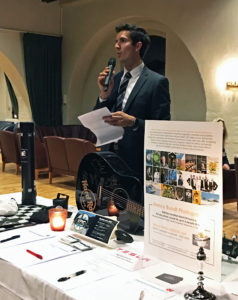 Sponsored by First House, Exxon Mobil and AIG, the 2016 AmCham Thanksgiving Charity dinner always centers around the authentic Thanksgiving meal, it was ideally fitting that the evening’s keynote speaker was the Minister of Agriculture and Food, Jon Georg Dale.

In his speech, the minister highlighted his commitment to the focus and quality of the food we share and eat in Norway.

“With a growing population, we have to produce more food in the coming years.

“For the agricultural sector, we face the challenge of ensuring safe and healthy food for a growing population, in particular a growing urban population. We must produce more food while making sustainable use of our resources,” the Minister said, before he eloquently carved the honorary first slice of turkey. 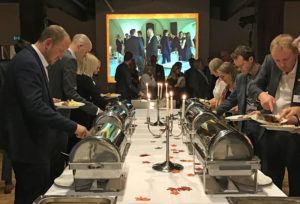 AmCham Norway would like to thank our members, friends and partners for attending the event, as well as the evening’s sponsors and prize donors for making this evening possible.

The evening’s sponsors and charity recipient.