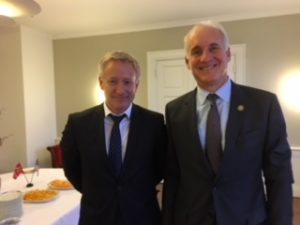 Prior to his role as Chairman of Energy & Finance for New York, Richard Kauffman worked in energy and finance at some of the highest levels, most recently serving as senior advisor to Secretary Steven Chu at the US Department of Energy.

Mr. Kauffman was invited to Norway through the US Department of State Speaker Program to share his experiences in using a market-based approach to building more cost-efficient energy systems. 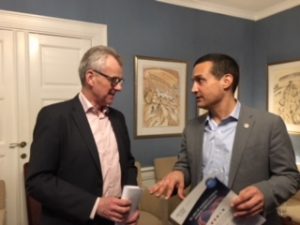 After welcoming remarks from CEO’s of both Stavanger Chamber and ONS, Mr. Kauffman went on to detail a US energy market very much in transition. “With infrastructure and inputs designed in another era, we can’t keep doing what we’re doing in the power sector – it is incredibly financially inefficient.” For its part, New York is committed to 50% renewables by 2030 for its 20 million citizen market.

Acknowledging that other countries and US states have led the way, Kauffman noted that New York was lucky in that “by being late to the game, we’ve been able to learn from unsuccessful energy market mandates. Government should set the rules and let companies determine how to best service the energy marketplace.” 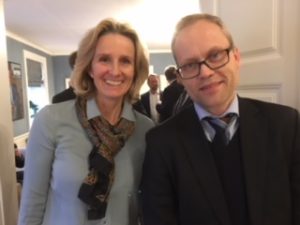 During the ensuing roundtable discussion, technology development and scalability dominated as key themes. “IT systems built atop legacy utility infrastructure, with no market interface, are difficult to build.” For companies and investors able to accurately navigate and innovative in the energy space, however, it was agreed that the future is bright.