A recent travel data analysis shows that the travel market in Norway is thriving, with Norway-USA air travel one of the major highlights. 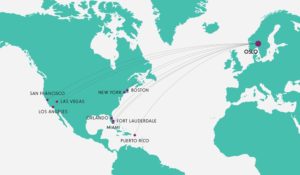 More overnight visits to Norway from all countries

Travelers from around the world are coming to Norway more often, according to a recent analysis by the government agencies Innovation Norway and Statistics Norway.

The increase in foreign overnight guests was widely distributed, with increases in four out of five regions around Norway. This development reflects recent efforts by Norway to strengthen tourism communication and marketing around the country.

Amidst the growth in Norwegian travel market, air travel between the USA and Norway has taken off. Back in 2002, there were no direct routes between the USA and Norway. That’s changed dramatically. Now, the airport has direct links to 8 markets in the USA, reaching destinations such as New York, Boston, Los Angeles, Oakland/San Francisco, Miami, Orlando and Fort Lauderdale.

Driven by the growth in direct routes, New York is now the leading intercontinental destination from Avinor Oslo Airport, with 292,000 passengers on direct services in 2015. For the full year of 2016, we are on track to surpass the mark of half a million passengers on direct routes between Norway and the USA alone. Counting indirect travel, the total number of passengers travelling between Norway and the USA is on track to rise past the million mark in 2016.

There are strong signs that the trend will last. Looking forward slightly, for the six-month period spanning September 2016 to March 2017, there has been a 12% increase in passenger bookings of airline flights to Norway with overnight stays, compared to the same period last year. While the increase in bookings to Norway from US-based travellers was above average at 19%, the biggest increases in bookings came from Asian-based travellers (Hong Kong 169%, Thailand 165% and Japan 110%).

Not only are there more foreign overnight guests, but these visitors are also staying longer in Norway. Now, 84% of visitors stay in the country for at least three nights – and 28% stay for six nights or longer, according to a study by Forwardkeys, a travel industry analytics provider.

Although Norway was once seen mainly as a summer season destination, traveller habits are changing. The same study also noted growth in winter travel to Norway, with a 21% rise in the number of winter-season foreign overnight guests in the period 2014-2016. This slightly outpaced the 20% growth in summer season overnight stays for the same period.