Norway is Europe’s best destination for international students, according to a recently-released report.

Following Norway in the top five were Ireland, Poland, Finland and the UK. With four Nordic nations in the top eight spots (Iceland was not included), the region was the international study’s clear winner.

“Scandinavian universities maintain their reputation of high student satisfaction characterised by offering solid and high-quality education to their students,” StudyPortals wrote in a press release.

“The availability of many courses in English accessible for exchange students was considered a very positive aspect within Scandinavian countries. Furthermore, the friendly and helpful fellow students, skilled professors and the diverse landscape were a definite plus for international students.”

“However, the cold temperatures and the lack of daylight in the winter were considered a negative point of studying in Scandinavian countries,” it added.

Norway’s international student satisfaction rating was an impressive 9.26, a marked increase from the 8.78 rating it received last year. 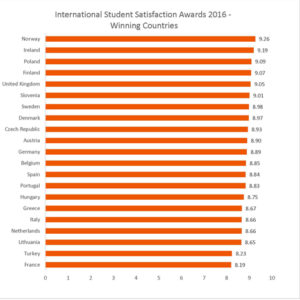 International students were most pleased with the University of Oslo, which was the only Norwegian institution to receive the ‘outstanding’ designation.

Several testimonials provided by StudyPortals mentioned the exposure to other cultures as a highlight of studying in Norway.

“It was great to be able to get a peek into many other cultures aside from the Norwegian culture. For the six months that I was able to study here I got to know a lot of interesting people and followed intriguing courses,” one Dutch student said.

“Studying abroad in Norway has provided me with a fantastic experience. I have been able to interact and share experiences with other cultures. It is really good to study abroad so as to know what people in other parts of the world,” a Tanzanian student said.

The StudyPortals International Student Satisfaction Awards 2016 were based on 15,965 students reviews on 53 different European universities.

Spain had the biggest number of winning universities (27), followed by Germany with 15. For the fourth year in a row, France was ranked as the worst destination for international students.