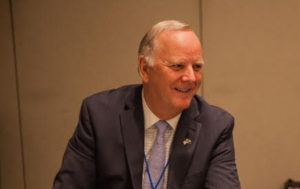 “If someone tries something ten times and succeeds ten times, then they’re not challenging themselves enough.”

– Kjell Bergh of the Borton Companies

Kjell Bergh is the Founder of the Borton Companies, a Minnesota-based holding company with subsidiaries involved in auto sales, overseas travel, and hotel and resort accommodations. Kjell moved to Minnesota from Norway in the late 1960s, and his fascinating international career ranges from canning food for the U.S. military during the Vietnam War to an appointment as Norwegian Honorary Consul in Tanzania. AmCham called Kjell at his Twin Cities office to discuss his international experience and how it has influenced his leadership style and business, for our International Leadership Interview Series.

Where did you start and how did you get to the position you hold today?

After high school in Norway, I got myself an opportunity to travel to the States with a couple of freelance journalism assignments.

I came back to go to the University of Oslo and took one semester. I was bored to tears. I came straight back to America and never looked back.

I first worked for a canning company processing food for the troops in Vietnam. Then I got a job driving tractor-trailers all over the Eastern seaboard. I did not have an American driver’s license and had never driven trucks before. It was challenging.

I came to Minnesota in December of 1967 to visit my brother. He talked me into staying here so I went to an employment agency. They sent me off to a small Volvo dealership, where I started selling cars for what was supposed to be 90 days.

The owner, who was the son of Norwegian immigrants, decided that I needed to buy the place so he pushed me into doing that.  I didn’t have any money, but he talked me into it.

What are some of the important decisions you make at the Borton Companies?

The main thing is that you have to realize your own limitations. I realized the only things I really know is how to pick good people and how to communicate.

For everything else, I hire people a lot smarter than me, pay them what they need, get out of their way, and don’t second-guess their opinions. That’s worked well.

I traveled to Tanzania for four months and told the leadership here, ‘this is how you reach me, but I am counting on you not having to.’ For four months, I never called any offices, and when I came back they were doing better off than when I left!

How do you manage to get the best out of your team?

We create an environment in which failure is not only tolerated, but actively encouraged. If a manager tries something ten times and fails eight, that is okay as long as the next time he only fails six. We work up the improvement scale until we’re getting it right.

If someone tries something ten times and succeeds ten times, then they’re not trying hard enough.

Does that same leadership style translate into some of the international settings in which you work?

It does, but when you get into diplomacy, it’s a whole different animal. You have to make some audible calls.

What do you think are shared traits among leaders? Positives and common mistakes?

A former Norwegian consul general in Minneapolis once told me ‘I refuse to take myself seriously, and I don’t believe my own press releases. However, I take my office very seriously.’ Leaders that are successful operate similarly.

Another lesson is in my relationship with the last two presidents of Tanzania. I tell them what they need to hear and not what they want to hear.

How has technology changed the way you acted as a leader? How has it helped develop your style?

It’s changed everything. The trick is to make sure that the technology works for you and doesn’t become a barrier. During a meeting the other day as everyone checked their mobile phones, someone said ‘please put away all weapons of mass distraction.’

The point is that if you become a slave to modern technology it will impede your forward motion rather than assist it.

How do you continue to develop your leadership skills?

You have to be open to learning new skills. Eleven years ago I went back to grad school to upgrade my skillset and make sure my brain was still working.

Like anything else in life, leadership styles must change as the level of sophistication and training changes in your operating environment.

I think the most important thing is to make sure you check your ego at the door. If you think you are the smartest person in the room, it is probably time to go to another room.

How does you leadership style translate into the Borton Companies?

If people like our leadership and operational style, which is heavily focused on making independent decisions in a fast-paced environment, they tend to stay with us forever.

Everyone knows that if you come here, we are going to take care of you, and you will earn a nice income with a good deal of security.

Where do you see yourself and the Borton Companies going in the future?

I just turned 70, but I have no interest in retiring. I’m having way too much fun.

On the Volvo side, we have an incredibly strong future. We will add another showroom here in Minneapolis.

Life is too short to be a spectator. If there’s something going on, I want to be a part of it.

What advice would you give to the next generation of aspiring leaders?

What matters is that you start leaping fences early so you are not scared of taking chances later in life.