“It is with deep sorrow and sadness that I write to inform you that our colleague and friend, consul Kim Nesselquist, passed away this morning, on Dec. 7, after being diagnosed with cancer in April this year. Kim fell into a deep and peaceful sleep, surrounded by his loved ones. 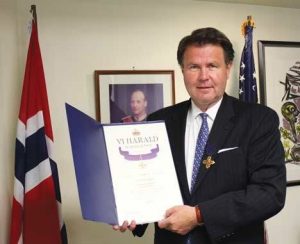 “I had the pleasure to visit Kim, Krystn, and their children in Seattle earlier this week. As always, Kim was smiling, optimistic, and humorous, despite his illness.

“As many of you know, Kim was a family man. The love and adoration Kim showed his dear wife Krystn and their three children Elise, Per, and Christian was ever evident. Kim was proud and happy about their successes as a family.

“Kim was appointed by His Majesty King Harald V to represent Norway as our Honorary Consul of Washington State and Idaho in 1998. This was a role Kim performed with great honor. He loved representing Norway; our country’s heritage, culture, and values. Kim carried out his duties with great impact, resulting in significant accomplishments and a long-lasting legacy. He was an important bridge between Norway and the Norwegian-American community.

“For over 20 years, Kim was a mentor for Norwegian students studying at Pacific Lutheran University (PLU) and other American universities on the West Coast. Last month, a fund was established in Kim’s name, the Consul Kim Nesselquist Norwegian-American Community Endowed Fund, which each year will allow several students to attend the University of Washington. Furthermore, Kim advised and assisted Norwegian companies in their U.S. endeavors, and he was the driving force behind planning Their Majesties the Queen’s and the King’s visit to Seattle and Washington State in 1995, and, 20 years later, His Majesty’s return visit in 2015.

“The enduring legacy of Kim’s contribution to the Norwegian-American community can also be witnessed in front of the Norwegian Residence on Massachusetts Avenue, in form of the iconic brass sculpture of HRH Crown Princess Märtha. Kim was instrumental in acquiring the statue from the outset, culminating in her unveiling on Sept. 18, 2005, which also marked the centennial of Norway’s independence.

“Kim was appointed Knight, First Class in 2012 by His Majesty King Harald V for his tireless work in support for Norwegian interests. He did so with remarkable stamina, good humor, and enthusiasm. He cared deeply for Norway and Norwegian interests, and was proud of being Norwegian.

“Norway has lost a champion.

“Kim’s warm spirit will live on through his family, his legacy and the Norwegian-American community.

“I will miss him sorely.”