Dear Friends of the American Revolution!

Dear Friends of the American Revolution! 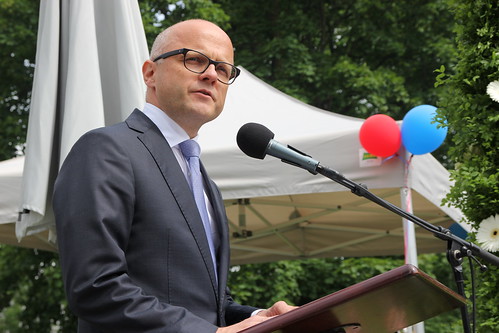 Mr Ambassador and Mrs Mills,
Friends of the American Revolution,
We are celebrating Independence Day. To be exact: 240 years since the Declaration of Independence.

But here today, we are also celebrating the interdependence between the US and Norway – and the rest of the world.

The US is in many ways the hub of global interdependence.

The US is everywhere:

Its cultural influence, its economic dynamism, its technological innovation, its political and diplomatic reach, its military strength.

In a world that is under great strain today, the US often finds itself called on to keep threats and risks in check through various means.

In this, the US is an indispensable nation. And because of this role, it is inevitable that at times the US is stepping into controversy in some places.

The American Revolution, and the American constitution, inspired Europe, including Norway.
You have the oldest still living constitution in the world. We have the second oldest.

This is why we work together in so many areas:

In safeguarding the future of this planet: our climate, our oceans, our shared Arctic.

In promoting human rights for everyone, including the LGBT community – from Orlando to Oslo, from Moscow to Kampala.

In supporting peace efforts: today we have some very good news coming out of Colombia.

In determination that NATO stands up for the security of our Eastern members.

In sending a clear message to our friends in the UK ahead of tomorrow’s meeting with destiny for Europe.

The US is everywhere. Simply put, the US matters so much to Europe and the rest of the world that at times we feel we should have the right to vote in US Presidential elections!

I must admit that feeling is particularly strong this year.

But in the absence of the right to vote, Norway has helped produce some notable senior US officials, including a couple of Vice Presidents from Ambassador Heins’ great home state of Minnesota.

One of them, Walter Mondale, visited Norway in 2007 for the eighth time, to open the Glacier Museum in Fjærland, his ancestral home. He noted that when he had first visited the area, the glacier extended all the way down the mountain; now there was a big gap between the glacier and the fjord. And he said:

“We must do something now to draw back from the abyss, and it’s going to take strong leadership from all governments, all nations. Especially the US must lead. We must work together with China and other developing countries to solve these issues.”

President Obama’s climate leadership is remarkable. US leadership enabled the Paris agreement. The US and Norway are close partners in the High Ambition Coalition under the climate change negotiations, and we are currently determining the next steps in this partnership. Last week, Secretary Kerry and I signed an agreement on closer collaboration to fight the disastrous deforestation that is threatening our planet.

And so, our interdependence continues to grow. In the face of today’s global challenges, it must. Inspired by the values that underpin our constitutions. These are values that constitute a rock solid basis for our great friendship.

So therefore: Happy Independence Day, everyone.

Source: Ministry of Climate and Environment