Event Summary: An Interactive Panel Discussion with the FBI

Event Summary: An Interactive Panel Discussion with the FBI 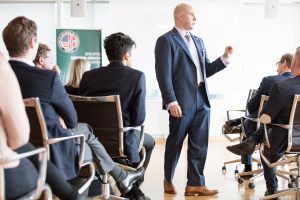 FBI Analyst Deni Popovski, Supervisory Special Agent Marcie Soligo, and Supervisory Special Agent George McEachern shared their vast experience and engaged in an open and active discussion regarding corporate misconduct. The agents explained the growing role of cyber threats, noting that cyber represents the most resource-heavy area at the bureau today with regards to corporate espionage and crimes.

Moderated by Helge Kvamme, Partner and head of Investigations and Compliance at Selmer Law Firm, the FBI agents highlighted several real-world examples of business-related corruption, and how to best leverage whistleblowers. The agents drew on their own experiences to further engage the event participants in the discussions.

By operating internationally, the agents explained, many companies can face challenges and risks for corruption violations of the Foreign Corrupt Practices Act when their business also has ties with the US – including the use of US dollars in operations. Exposure can relate to all levels of an organization, including sales people on the ground.

Notably, Supervisory Agent McEachern mentioned that the global scope of corruption and corporate misdoings could cost the society as much as $32 trillion globally – or 5% of the global GDP. For perspective, McEachern explained that $1 trillion would be enough to feed the country of Portugal for one year.

Comparatively, McEachern said, the FBI imposed fines totaling $2.6 billion in 2016, with nearly half of all cases coming to the FBI’s attention via self-reporting from company employees. The US, he explains, spends more money on investigating cybercrime than on counter-terrorism.

AmCham wishes to thank Selmer Law Firm and all members who participated in this enriching event.