Cisco recently hosted AmCham’s first Digitalization Forum session. The objective of this and future roundtable discussions is to serve as a platform upon which AmCham’s diverse membership can share perspectives on how digitalization is affecting respective industries.

Session moderator Jennifer Vessels from Next Step, based in Silicon Valley, guided invited participants through discussions around various topics related to the future of digitalization in the Norwegian context.

While the participants agreed that digitalization as a concept is potentially daunting and that collaboration across industries, sectors and policy makers is essential to create dialogue, it was also noted that certain aspects are more challenging than others.

Perhaps most notably across industries was the willingness for both customers and employees to embrace change.

“One challenge is that many people are too entrenched to care and unwilling to implement full digitalization.”

“This not only means attracting young, new talent to companies, but relates to customers too. Relevant technologies exist in many industries, but people don’t use them,” observed one Managing Director participant. 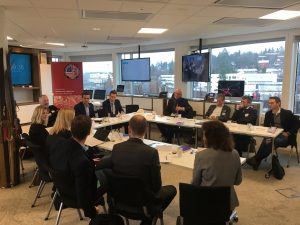 Aspects such as trust in the cloud, clear business rules, attracting competence and increased understanding of what digital change means, were all discussed as keys to successful digitalization.

“We need to break through the fear of change! In order to do so, we need a better understanding of what digital change means. That means teaching people how to change and implement new technologies and opportunities in the process – which is difficult,” said Next Step CEO Jennifer Vessels.

It was generally agreed that in order to succeed in digitalization processes, it is essential to show successful pilot projects, as well as sharing best practices and examples of success, both across industries and at the board and employee level within companies.

“Look at how electric car sales are exploding in Norway through incentives. If Norway would provide incentives in that same way to companies who work with digitalization, it would inspire startups and promote change,” stated one participant. 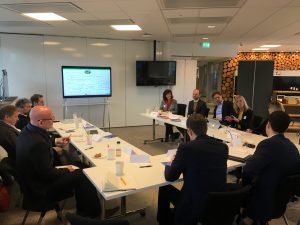 “In Norway, it is mostly Innovation Norway that invests in startups. Private companies and other sectors need to invest in startups too.”

“As an example, Microsoft not only invests in companies, but helps and guides them through various processes and helps them use collaborative resources,” Kristine Beitland, Government Affairs Manager at Microsoft Norge, said.