In collaboration with the French Norwegian Chamber of Commerce, and Gambit Hill + Knowlton, AmCham Norway arranged a fully packed defence breakfast seminar, Navigating Right for the Future, discussing the High North and its opportunities and challenges. 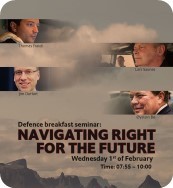 The breakfast event, hosted at Gambit Hill + Knowlton, featured remarks from State Secretary Øystein Bø in the Ministry of Defence. The remarks were followed by a panel discussion featuring Jim DeHart, Chargé d’Affaires at the US Embassy; Thomas Fraioli, Commander of the French Navy & Analyst at the French Directorate of Defence Strategy and Lars Saunes, Rear Admiral & Chief of the Royal Norwegian Navy. 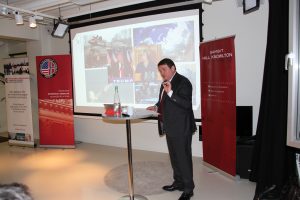 Discussing the long-term plan for the Norwegian Defence, Secretary Bø highlighted some of the key elements and challenges for the High North strategy.

“As a state neighboring a country with nuclear power, we need to stand with our allies. “We need to work together. That’s why we have US Marines as guests in the north. This is nothing new and we’ve been doing it since 1949.”

“It is also why we have French and UK cooperation too, we need to train together and work together to best share the burden,” the state secretary said. 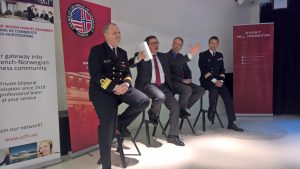 “We are fully committed to the two percent goal and we are currently number four in NATO in terms of investments in defence compared to BNP, with US number one,” Bø said, listing budget increase, modernization and efficiency as well as structural changes as essential points in the long-term plan.

During the panel discussion, The High North – Strategic, Operational and Industrial Opportunities & Challenges, Lars Saunes, Rear Admiral & Chief of the Royal Norwegian Navy, also pointed to the importance of NATO and how “the blue parts of the world will be a strategically important place.” 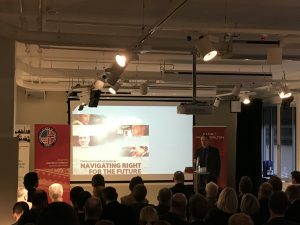