The Day After Thanksgiving: Black Friday

The Day After Thanksgiving: Black Friday

Black Friday is the day after Thanksgiving, and when the Holiday shopping season officially starts. Black Friday kicked off in Norway in 2010 and has since grown to be one of the most important days for Norwegian retailers and shoppers. The festivities often begin as early as 1 a.m., with shoppers waiting in line to grab the best deals. 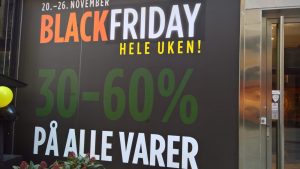 The name ‘Black Friday’ comes from the accounting phrase ‘into the black,’ indicating profit – as opposed to ‘red,’ indicating loss of profit. The first recorded use of this term comes from an attempted manipulation of the US gold market called the Panic of 1869. Originally, retailers had been ‘in the red’ for most of the year and the day after Thanksgiving they would finally go ‘into the black’ thanks to eager holiday shoppers.

Experts say that Black Friday has shifted much of retail shopping from December to November. In 2015, Norwegians spent 3.1 billion kroner during Black Friday store sales. This set a record, increasing by 19.5% from 2014. This phenomenon is picking up attention and success in many European countries including Germany, Switzerland, Poland and Romania.

This year, the shopping festivities will take place on November24th. Increasingly, the sales do not stop on Black Friday; customers can find deals in the days leading up to the big day as well as on ‘Cyber Monday,’ the online version of Black Friday after the weekend.

According to Oslo Handelsstands Forening’s Lars Fredriksen, the main purveyors of Black Friday are e-commerce and electronics stores. High-end and brand name stores, however, often feel pressure to have sales when they traditionally do not.

Many shopping malls around the country have capitalized on the concept as well. “The development among several of the major chains and malls has been that they have extended Black Friday to be Black Weekend and some have even called it Black Week,” Fredriksen says.

He believes that stores and malls will begin to step up the competition and that the phenomenon will continue to grow in Norway.

In the US, however, 35% of shoppers say they intend to do most of their shopping on Black Friday this year, down from 59% in 2015, according to recent analysis by PwC. The busiest shopping day of the year is becoming less of a draw. Since 2014, the Saturday before Christmas – known as ‘Super Saturday’ – has surpassed Black Friday in sales.

“We’re definitely seeing a decreased significance in Black Friday,” says Dawn Eber, PwC’s US consumer markets risk assurance leader and partner. “Consumers know when the sales are. They’re becoming more adept at their online shopping and walking into stores on that particular day doesn’t bear as much of a return in terms of pricing, which still is the number one driver.”