U.K. Prime Minister Theresa May used to say she wanted a customized, “bespoke” trading relationship for Britain once it leaves the European Union. That was before she, and her negotiating hand, were weakened by the results of a snap election that backfired. Now May might have to soften her approach to Brexit by agreeing to maintain more ties to the EU’s trading bloc than she previously anticipated. If a bespoke deal is now a stretch, Norway’s relationship with the EU might be back on the table as a model.

1. What is the Norway model?

Norway, like Iceland and Liechtenstein, isn’t in the EU, but is part of the European Economic Area, which also encompasses the 28 EU nations.

2. How does this benefit Norway?

Members of the EEA have access to the lucrative single market for goods and services to which the U.K. sends more than 40 percent of its exports. Banks based in EEA member nations have “passporting” rights, which means they can access the EU without having to have offices there. Because Norway and the other non-EU members of the EEA aren’t in the EU’s customs union, they are free to line up their own trade deals with non-EU countries. They also don’t take part in the EU fisheries or agriculture policies.

3. Does the Norway model have a downside?

Of course. Members have to accept the EU principle of free movement of labor (i.e. people), which directly conflicts with what many interpret as a main goal of Brexit, namely to control immigration to the U.K. from the bloc. However EEA members like Norway can make a case to enact “safeguard measures” to suspend free movement for people. Britain would still be expected to accept many of the EU’s rules in areas such as employment rights, without enjoying a say in crafting them. (Norway has adopted 75 percent of the bloc’s laws in return for accessing the market.) EEA-only members can’t veto a nation joining the EU. The U.K. would also have to tolerate some continued oversight by the European Court of Justice and also send money to Brussels. 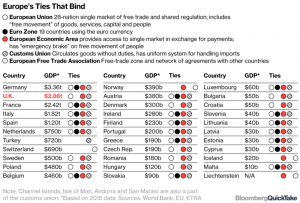